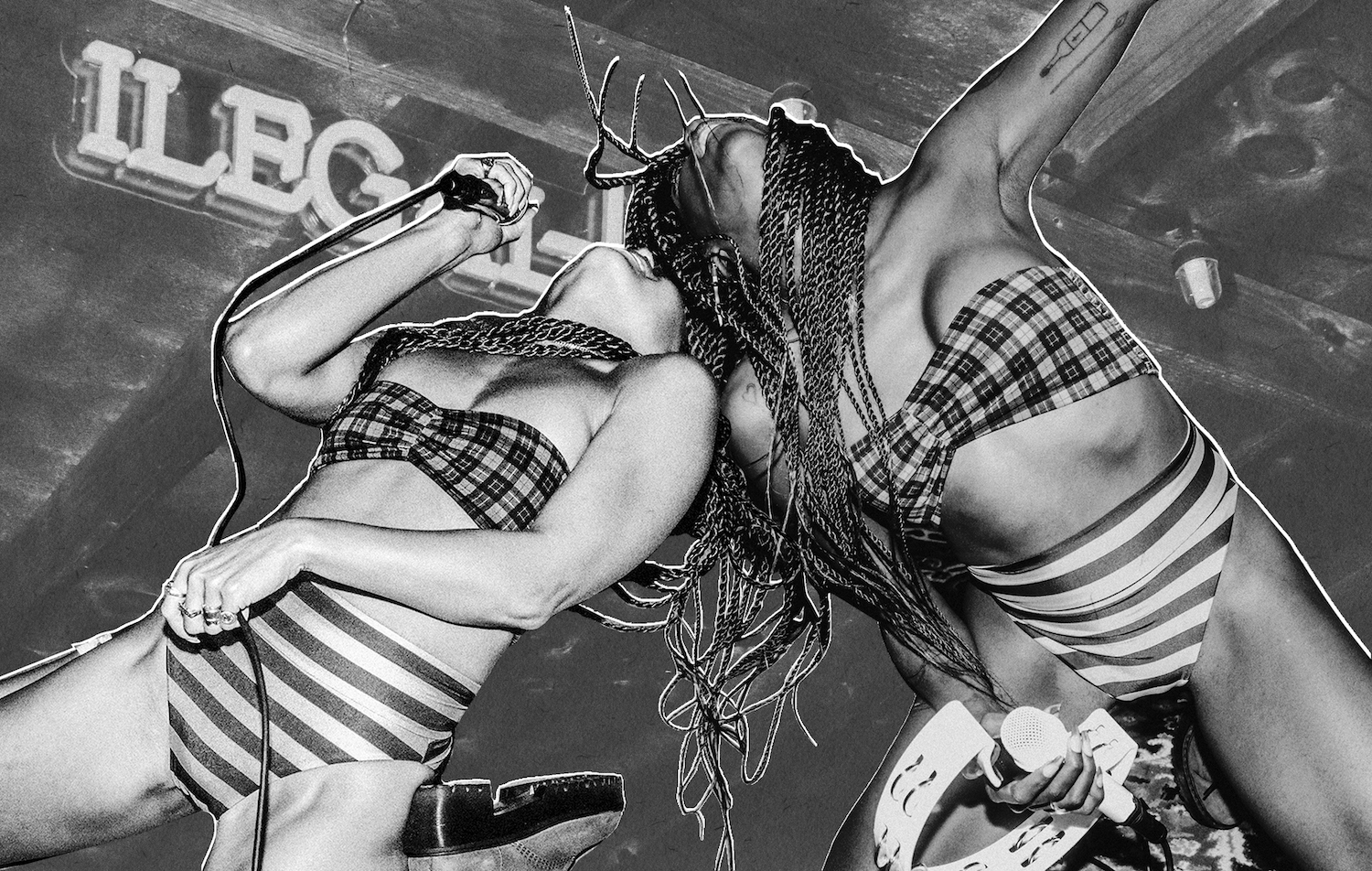 Incomparable rock duo SUSU, composed of Kia Warren and Liza Colby, have a lot to say.

Ilegal Mezcal sat down to talk about launching their project during the pandemic, not being able to tour for a year, centering Black perspectives in rock music, (not) doing mushrooms in Europe, and upcoming album Susie, the precursor to their EP Panther City.

May 2021. It’s a Saturday, a sunny spring day at Ilegal Mezcal HQ in Brooklyn’s seaside Greenpoint neighborhood. The drinks are flowing, the air is full of levity and hard guitar, the sun is glimmering off the nearby water. A small crowd is converging around Kia Warren of Black femme punk duo SUSU as she jumps off a pool table with tambourine in-hand.  Supporting trio guitarist Joey Wunsch, drummer Ronnie Bruno, and bassist Connor McClelland are tearing it up on the nearby stage — partner-in-crime and co-lead vocalist Liza Colby is posted on the pool table rocking out on tambourine between vocal belts. In this bubbling pot of roiling guitars, soaring voices and howling lyrics breathing life into a setting that until that point in our post-COVID world seemed like a far-off fantasy: a good old-fashioned rock show.

“Time is fucked up for me [these days], but I remember this was our third show in two days after lockdown,” Kia recalls warmly. “It was a one-two punch, where we were really just trying to test the waters and see if this was possible, that we could play shows with people. It almost felt like a dream. By the time we played at Ilegal, we were like, "Fuck it, this could be the last show that we have in a while", so we were going balls to the wall because we didn't know when the next opportunity would be.”

That first cathartic whirlwind of shows, preceded by a pair of shows at the Bowery Electric, kicked off the Bar Ilegal tour, and the first time SUSU had performed live since early 2020. These early sets in New York served as a site for release for the duo and their audience alike, but that energy — that swirling hurricane of freedom — is nothing less than the vital core of SUSU’s craft.

Their first EP Panther City is an embodiment of this energy. A five-song storm from start to finish, the EP syncretizes heartbreak, fears, romantic nostalgia, and starting over by way of reverberated electric guitar, chugging bass, and rock drums. The great bridge between all of this is the epic duet of Warren and Colby, twin dragons with soaring vocals drenched in soul and glittering with the rattle of a tambourine. “It can’t be over / That’s what I told you when you said goodbye / And I’ve got you on my mind all the time,” they sing on mid-way track “It Can’t Be Over”, a vulnerability sung with such strength. It’s an anthem to everyone who has ever wanted someone, and who has had to pick up the pieces and continue on.

Panther City was made at Niles City Sound in Fort Worth, Texas. The record was produced by Ilegal Mezcal and engineered by Josh Block, who co-produced and served as drummer. Alongside right hand engineer Joel Raif and a studio band —guitarist Nik Lee,  rhythm guitarist and organist Andrew Skates, bassist Aden Bubeck and drummer Jordan Richardson— SUSU brought their first work to life with all the full-throttle energy of a live recording, although Warren prefers to call it a “sonic experience”. After making the record, the band were slated for a largely sold-out European tour in February 2020, and a debut show on Valentine’s Day 2020 at classic East Village venue Berlin Under A.

The venues were booked. The band got on the plane. If you’ve been alive these past two years, you know how this story goes.

“We had different legs of the tour: we started in Austria, went to Italy, we finished off with a strong effort in Spain, and the Spanish bookers called our tour manager, canceling one by one,” Kia recalls. “When we left [the U.S.], coronavirus was something that was being talked about, but it was still very distant. My boyfriend who's also a musician was like, "Have you guys heard of this?" And we're ‘ignorance is bliss’-ing it. And then we're in Croatia in the second week of our tour, finishing this Blues festival — sweating, having the time of our lives, sold out shows — and we get into bed…”

“...Both of our mothers are West Indian, and neither of them are alarmists, and both had sent texts to us being like, ‘Please don't go to Italy and be really careful out there,’” says Liza. It’s March at this point. After a non-fruitful hunt for psychedelics, the band is tucking themselves into bed when their phones start going off. “It's like a fucking strobe light is going off and my phone is blowing up,” says Liza. “Everybody that I know is hitting me up being like, ‘You guys have to get home right now.’ It was just mayhem; Kia's trying to get on the phone with our airlines...we all look at each other and we're like, ‘Yeah, it's probably pretty smart that we didn't do the mushrooms.’

As the band returned home and went into lockdown, any idea of a tour and actually launching the project on the road became a distant fantasy. Kia moved to Los Angeles pretty much straight from Europe, to isolate from older parents. As the world plunged into despair, SUSU found themselves on opposite coasts at the height of the age of ZOOM and with a lot of raw material from Europe.“

When we played at Berlin [Under A], it was like a classic New York City set, like thirty-five minutes. The next 10 days in Europe, we were just hustling to make sure we had 90 minutes for the road,” says Liza. “So we're playing the shows, nobody knows these fucking songs because we were working the songs out the day before the songs were performed on the first day of the fucking tour,” says Kia. “There weren't many assets or grants or applications that were helping artists [during the height of the pandemic]. But the other thing is, motherfuckers who weren't about it have fallen off. We were able to do eight singles, videos, placements for them, and record a new album that we're gonna start rolling out this year.”

As the pair speak to me over the video chat void we have all become all-too-familiar with, their chemistry could not be more in-sync. Finishing each other’s sentences while across the country from one another, as if we were interviewing at an intimate distance at a dive bar. It’s this chemistry that would allow them to make a full-length album remotely, eventually being able to enter a studio as time went by and restrictions softened.

“It's called Susie, and it's 13 songs, 11 are originals, and it spans the gamut of the SUSU spectrum,” says Kia. “There's a song that has a country lilt, and there's kick-you-in-the-face Debbie Harry New York City rock n' roll. There's some tropical. There's some references to my Jamaican and West Indian roots. I feel like with this album, we were really able to craft the story as much as the sound.”

Over the course of 2020, the pandemic raged alongside the streets as the Black Lives Matter movement took hold. The question of racism, accountability, and centering the voices and experiences of Black people came to the fore everywhere from politics to punk. A decolonization and racial reckoning was taking place, one SUSU has not shied from.

Let’s speak plainly: Big Mama Thornton’s music was covered by Elvis Presley and Janis Joplin and was not given her flowers, Sister Rosetta Tharpe could play guitar with the best of them, contemporary Black femme British punks Big Joanie should have more credit, and rock music is Black music. SUSU’s spin on Buzzcocks’ punk classic “Ever Fallen in Love” belies this fact; it seems an audacious move, to try their hand at a Britpunk classic like that, but they do it so effortlessly that those who may not know rock’s history would mistake it for an original.

“One of the things Kia and I connected on, especially in the downtown New York City, was like I was not seeing other Black women where I was like, ‘holy shit, you are my contemporary and your voice is crazy and you're inspiring me,’ says Liza. “Part of it is like when we're on stage together, I think you're getting like, not only do you get to hear Black women who are singing and who have big voices and we're actually singing, but two Black women who are best friends showing people that you can have access to this, that this is here, that rock n’ roll is not dead, that Black women singing is not dead. You don't have to just go into rap. You don't have to go into soul. You can sing rock n’ roll, and it’s totally accessible.”

SUSU got it’s name from a Patois word loosely meaning “to create chatter around something.” Liza and Kia, beyond spreading the gospel of a punk rock that centers the Black femme experience, attribute a meaning to their name and it’s inverse. SUSU backwards is USUS, and their music concerns just that: all of us who have felt excluded, who have felt like the world could be better, who got tired of fighting for it and chose to dance between battles.

“Black people have always been on the wave; when we go into the studio, it’s not like ‘we’re Black woman doing rock and roll’ — it's like, ‘does this song bang?’”, says Kia. “It's more about utilizing ourselves as the guiding star and being aware. When I was a kid,  I was seeing maybe Tina Turner or Poly Styrene, but I wasn't seeing this across the board thing. I think of SUSU as this world where anything fucking goes and we're not limited by any labels and we want everybody to be a part of it. I hope it becomes something people identify with and can find solace in. But right now, it just feels important to honor first our voices and then the world can do what it does.” 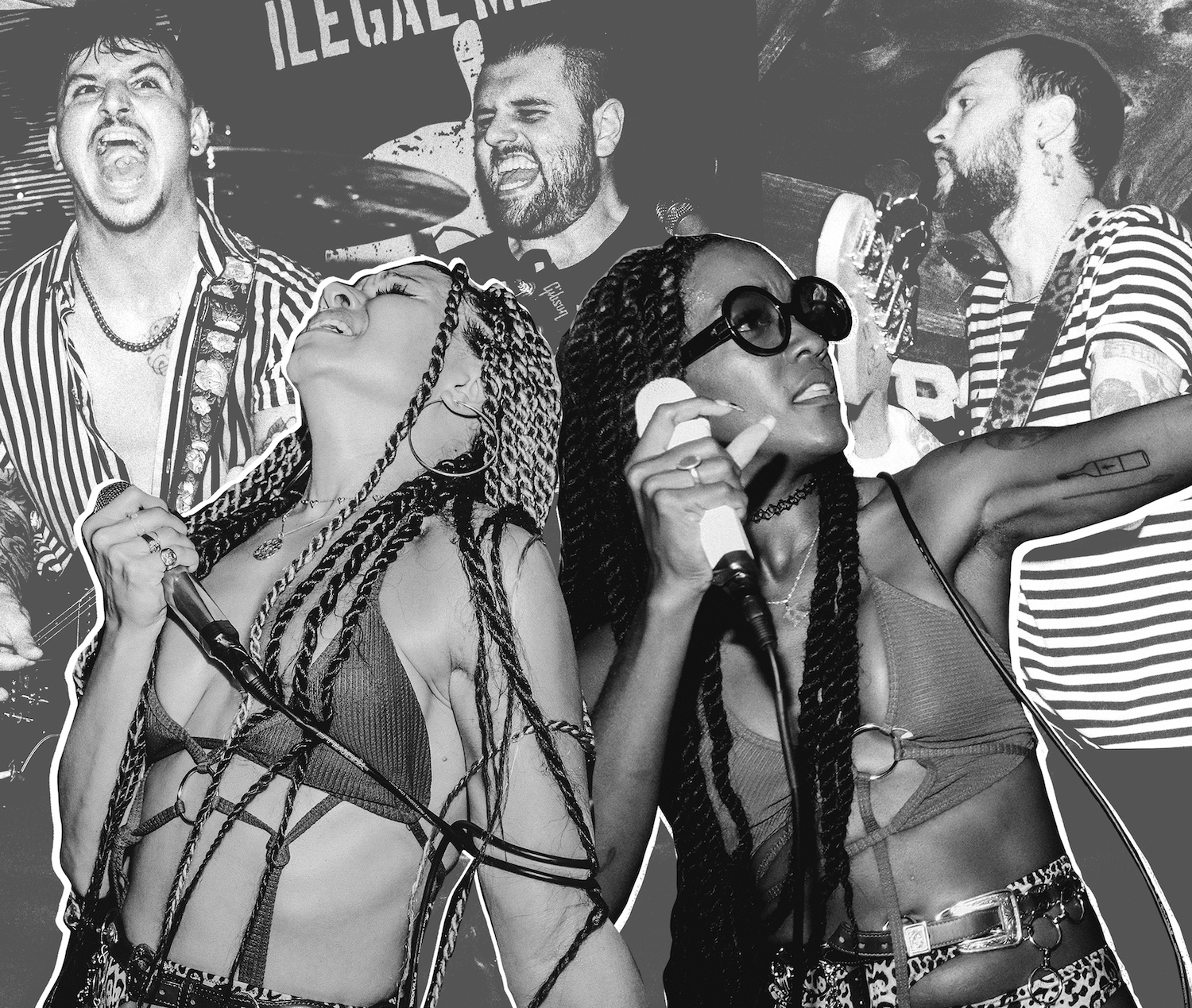 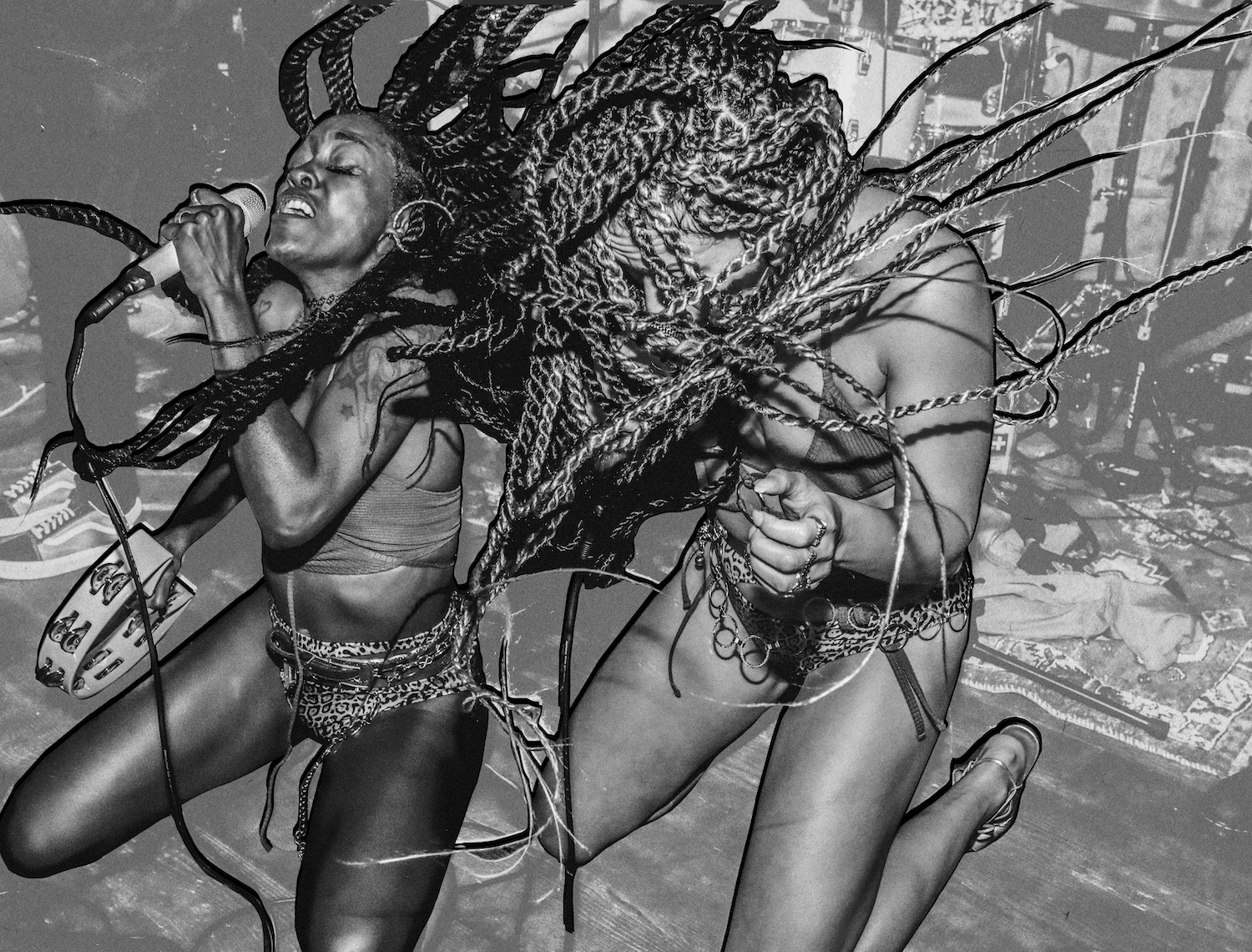 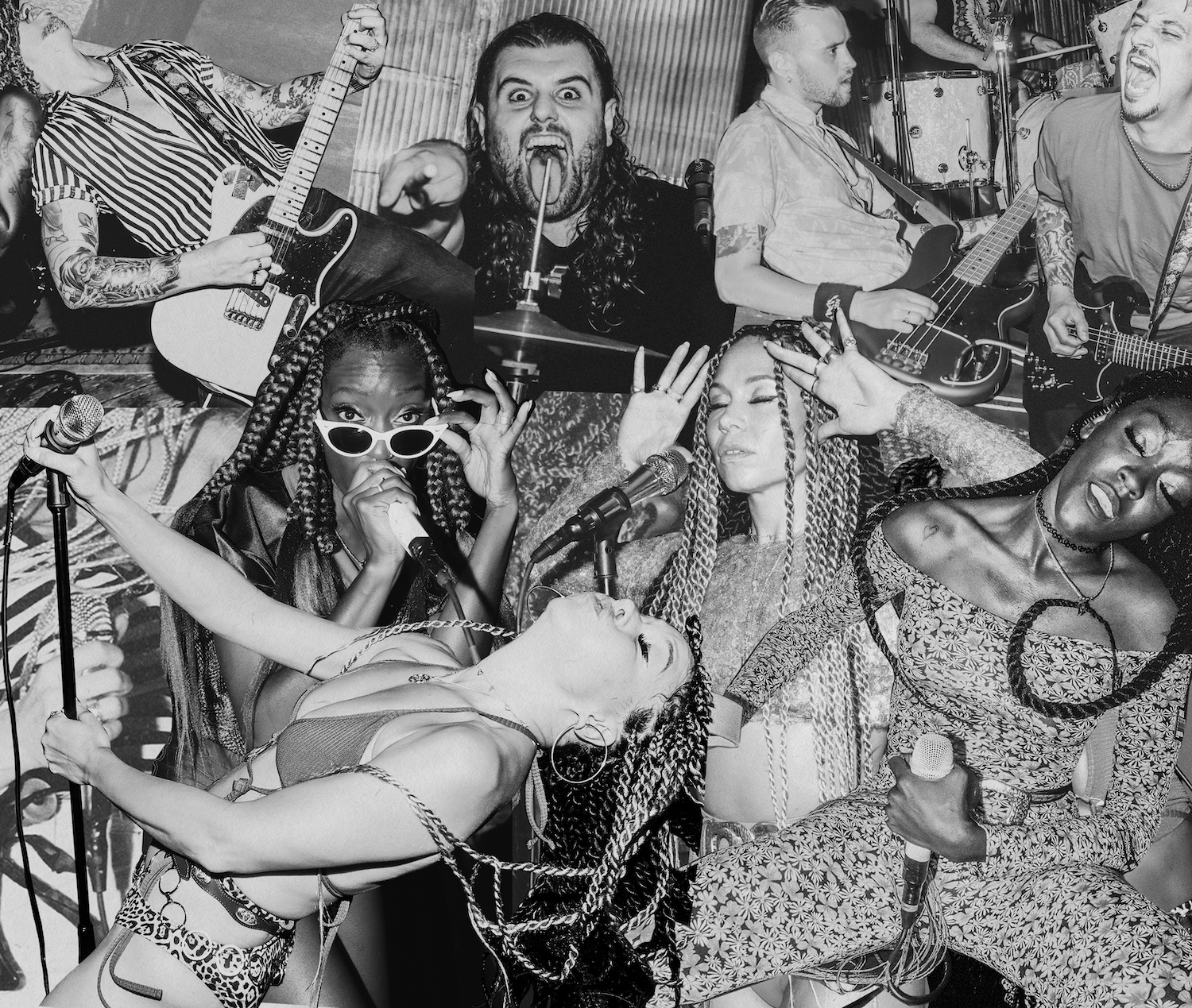 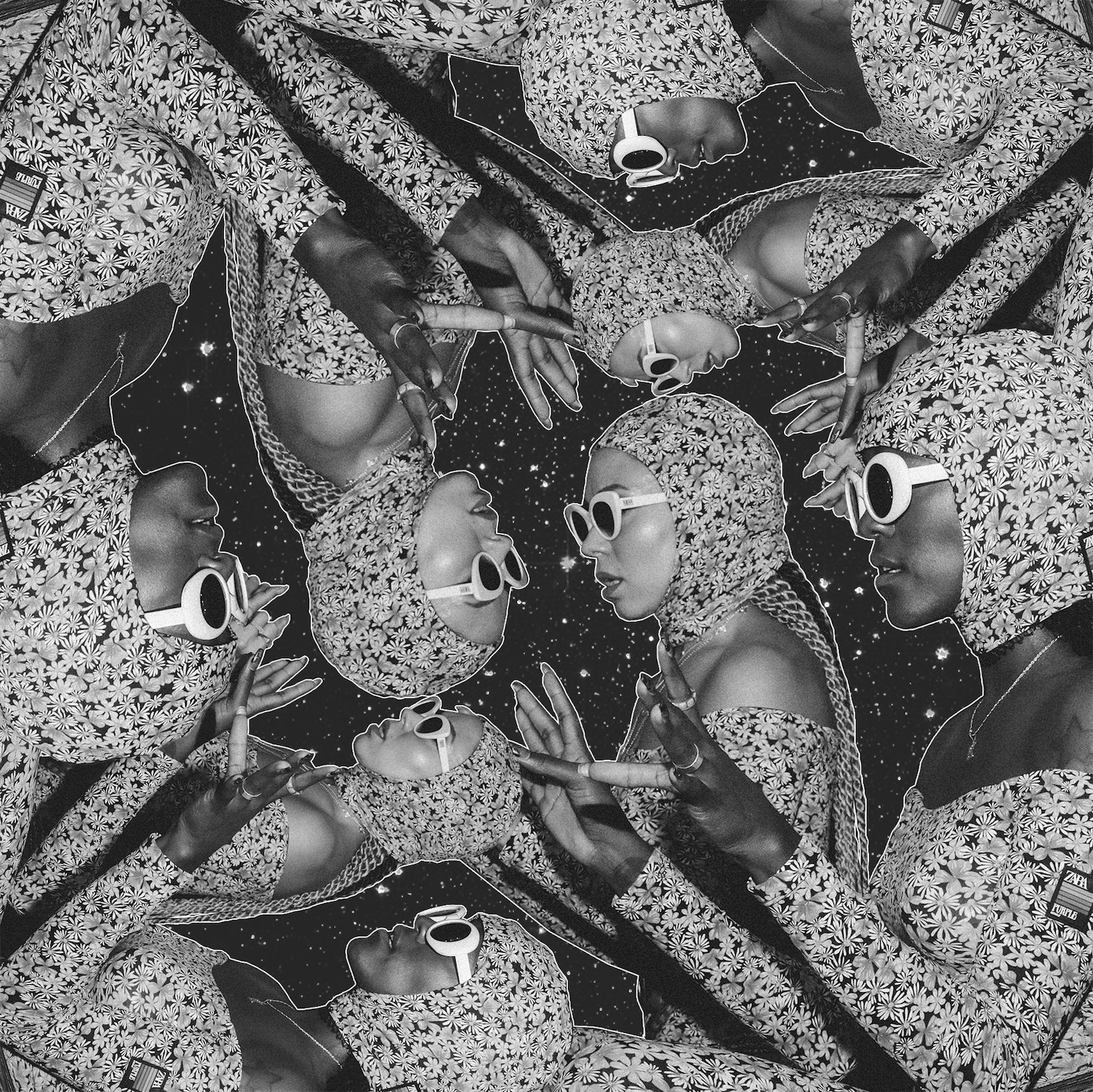 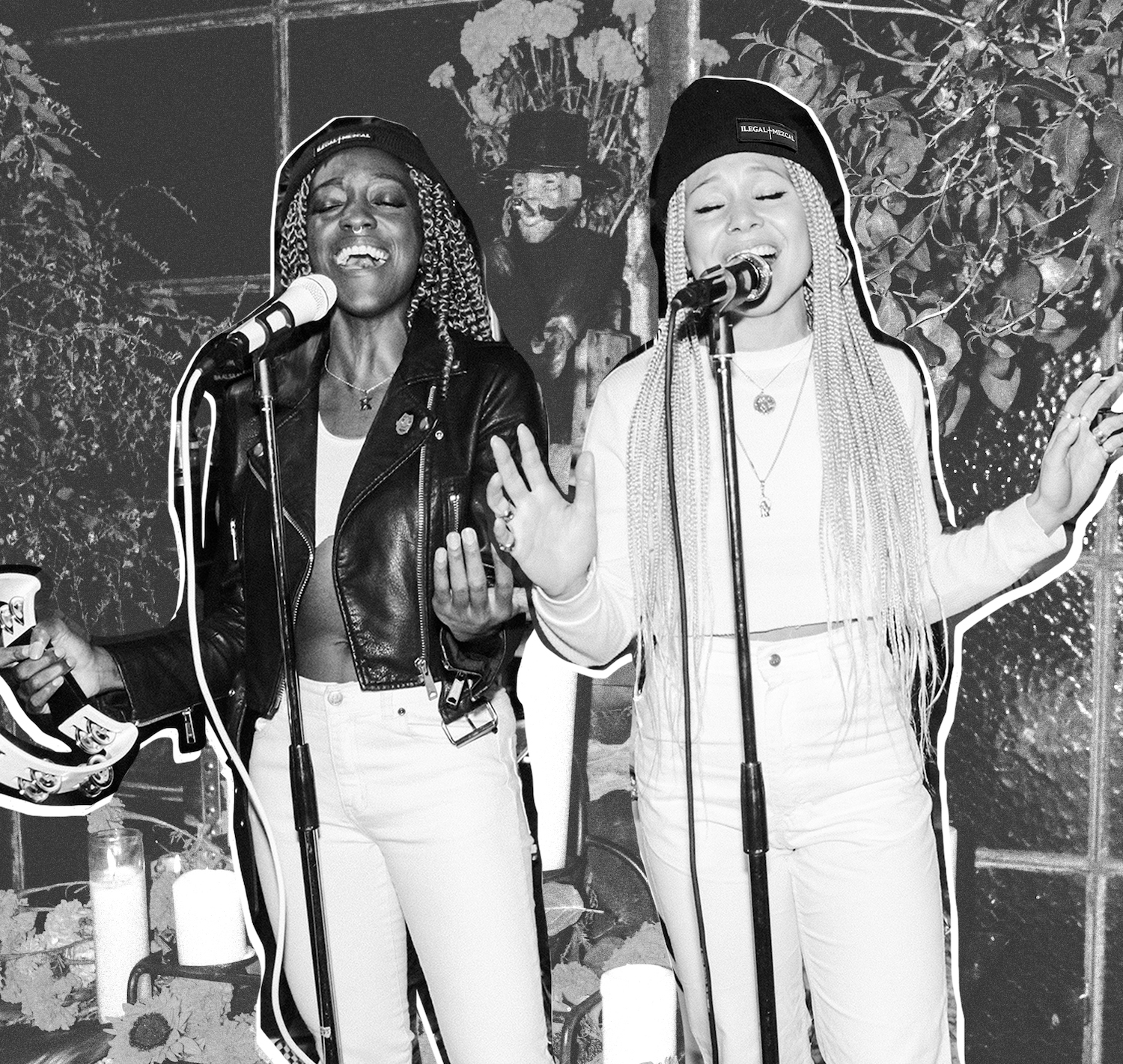